It was a happy hour when representatives of M.S. Walker first spied the new bottle Meredith-Springfield Associates, Inc. created for them. The unveiling of the plastic bottle was the culmination of a relationship that began last year when M.S. Walker – a wine and spirits wholesale distributor founded in 1933 and based in Somerville, Mass. – began soliciting plastics manufacturing companies to create a 100 ml plastic bottle to replace a glass bottle of the same size. In reviewing the recommendations M.S. Walker received, one name stood out from the rest for an exceptional end product: Meredith-Springfield, based in Ludlow, Mass. 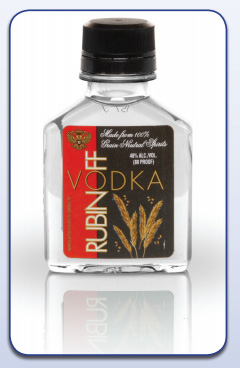 According to John Avigian, plant manager of M.S. Walker, the molds for glass 100 ml bottles were coming to the end of their life cycle and would cost a substantial amount of money for M.S. Walker to refurbish. Since sales for other larger-sized bottles increased when they were switched from glass to PET (polyethylene terephthalate), Avigian started looking for a local manufacturer willing to work with M.S. Walker to develop small plastic bottles.

“We told Meredith-Springfield that we wanted to replace our 100 ml glass bottles with plastic bottles of the same size since our glass molds were approaching the end of their shelf life,” said Avigian. “Meredith-Springfield said they would research its feasibility since other plastics manufacturing companies were unwilling to tackle that project for us.”

The spirited technicians at Meredith-Springfield determined that they would be able to handle M.S. Walker’s request. And since the plastics manufacturing company was operating much closer to M.S. Walker, the distributor would ultimately save money on shipping costs in addition to the potential increase in sales the company would realize. “With smaller-sized bottles, plastic sells better. Our previous company didn’t want to get involved in making a small PET bottle for us because of our low volume request. Meredith-Springfield, by comparison, is a smaller operation and they were willing to tackle that project. Since I had to look around for a new company anyway, I thought I’d look closer to home,” said Avigian.

In changing the bottle from glass to plastic, Meredith-Springfield was also able to change its shape. The glass bottle is concave on one side and convex on the other. For the plastic bottles, Avigian wanted both sides to be convex so it would be easier to put the label on. “I don’t have to reposition the bottle to put on a label now. The design I wanted them to make, they followed through on every aspect,” Avigian said. In addition, Meredith-Springfield created a bottle with a strong enough neck to hang in the liquor store instead of one that is simply placed on the shelf. “The bottles Meredith-Springfield created hang better on the rack than the glass bottles. They reshaped the neck and did a great job.” 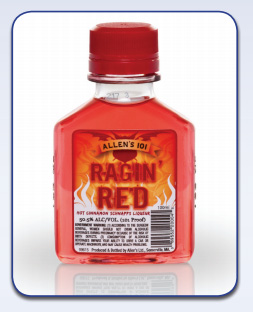 In designing the new bottles, Avigian said there was an open line of communication between M.S. Walker and Meredith-Springfield and that the proximity of the two companies made the process of creating a new bottle flow much easier. “Meredith-Springfield came out to look at our operation and saw our bottles and I even went to their plant. The beauty of working with them is that they’re right up the street, even though they’re 70 miles up the Massachusetts Turnpike. In all honesty, I wish I was getting all my bottles from Meredith-Springfield because they’re right here in Massachusetts. I like doing business locally,” Avigian said.

“Plus, by changing over to plastic, we’re able to ship a lot more bottles more easily,” Avigian explained. “We have 40 trucks that deliver throughout New England to liquor stores, hotels and restaurants. The plastic is half the weight of the glass. While the glass bottles were 24 pounds, the PET bottles are 12 pounds.” At the beginning of the relationship with Meredith-Springfield, M.S. Walker was putting out a relatively small volume, said Avigian. Today, the output has seen a modest increase thanks to Meredith-Springfield. And although M.S. Walker had a mold cost up front, they are still realizing a small cost savings per case, said Avigian, who expects that figure to rise once the mold is paid for

In addition to saving money, M.S. Walker is also saving the environment with its new bottles. According to Dwight Lowe, director of sales at Meredith-Springfield, 100 percent of the PET used in the new bottle is recyclable through curbside collection. And because the bottles are significantly lighter than the glass bottles M.S. Walker previously transported, their freight costs have also decreased; M.S. Walker is reducing its carbon footprint thanks to Meredith-Springfield’s technology.

We use cookies on our website to give you the most relevant experience by remembering your preferences and repeat visits. By clicking “Accept”, you consent to the use of ALL the cookies.
ACCEPT
Manage consent

This website uses cookies to improve your experience while you navigate through the website. Out of these, the cookies that are categorized as necessary are stored on your browser as they are essential for the working of basic functionalities of the website. We also use third-party cookies that help us analyze and understand how you use this website. These cookies will be stored in your browser only with your consent. You also have the option to opt-out of these cookies. But opting out of some of these cookies may affect your browsing experience.
Necessary Always Enabled
Necessary cookies are absolutely essential for the website to function properly. This category only includes cookies that ensures basic functionalities and security features of the website. These cookies do not store any personal information.
Non-necessary
Any cookies that may not be particularly necessary for the website to function and is used specifically to collect user personal data via analytics, ads, other embedded contents are termed as non-necessary cookies. It is mandatory to procure user consent prior to running these cookies on your website.
SAVE & ACCEPT